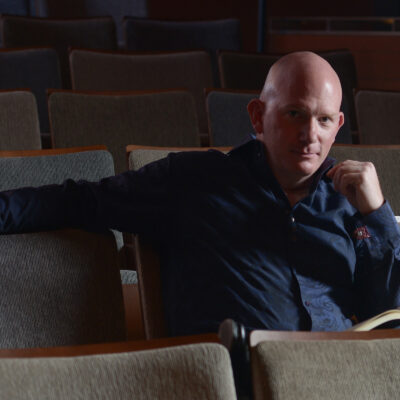 Violinist Master Gunnery Sergeant Peter Wilson joined “The President’s Own” United States Marine Chamber Orchestra in September 1990. He was appointed principal second violin in 1991 and string section commander in 2007. For the past 25 years, he has also been the “Voice of the Marine Barracks,” serving as the official ceremonial narrator of Marine Barracks, Washington, D.C. Today, he retires after 30 years of honorable and dedicated service to our country.

When Peter was nearly three years old, his mother put a violin in his hands and began to teach him to play. He continued to play through high school, taking lessons with Brother Donald Portnoy (Eta Theta Chapter – Catholic University of America – 1957) but wasn’t sure if he would continue after graduation. At the time, Peter was very interested in broadcast journalism. After graduation from Morgantown High School in 1986, he enrolled at Northwestern University.

Two years later, in 1988, Peter would be initiated into Phi Mu Alpha by the Iota Chapter. During his senior year at Northwestern, Peter was informed about an opportunity with the Marine Band by his friend Pat Sheridan who was playing tuba with the band. Brother Wilson was already committed to serves as the Concertmaster of the Walt Disney World Orchestra. Despite a demanding schedule, he managed to arrange for an audition with