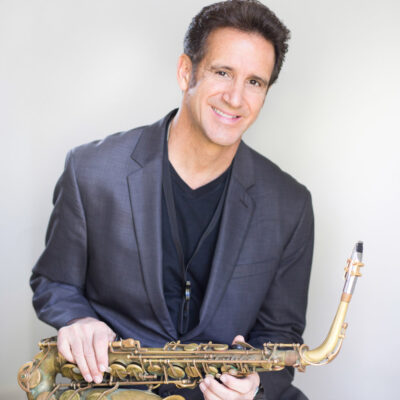 After graduating high school in Southern California in 1976, Eric went on to study at the Berklee College of Music in Boston, Mass. There he studied with the legendary saxophone professor, Joe Viola. By the time he left Berklee, Eric had achieved the highest proficiency rating given by the school. In 1995, Eric was awarded the Berklee Distinguished Alumnus Award for outstanding achievements in contemporary music. He has since gone on to perform in over 75 different countries, recorded 14 solo CD’s and has played on hundreds of records, films, television shows, and commercial jingles.

Eric started his professional career in 1980 with famed New Orleans trumpeter Al Hirt. After returning to Los Angeles Eric became a member of the famed Chick Corea Elektric Band. He recorded 6 CD’s with the band and won 2 Grammy Awards. Eric went on to join the Jeff Lorber Fusion. Among the CD’s Eric recorded with Jeff, 2 were nominated for Grammy Awards. Jeff Lorber was instrumental is producing many of Eric’s CD’s. Other artists Eric has performed with include Elton John, Barbara Streisand,